Is the eye a bad design?

Is the eye a bad design?

One of the tired old canards on which antitheists have dined out for years is the claim that our eye is stupidly wired back to front, something no decent designer would use.

‘Any engineer would naturally assume that the photocells would point towards the light, with their wires leading backwards towards the brain. He would laugh at any suggestion that the photocells might point away, from the light, with their wires departing on the side nearest the light. Yet this is exactly what happens in all vertebrate retinas. Each photocell is, in effect, wired in backwards, with its wire sticking out on the side nearest the light. The wire has to travel over the surface of the retina to a point where it dives through a hole in the retina (the so-called ‘blind spot’) to join the optic nerve. This means that the light, instead of being granted an unrestricted passage to the photocells, has to pass through a forest of connecting wires, presumably suffering at least some attenuation and distortion (actually, probably not much but, still, it is the principle of the thing that would offend any tidy-minded engineer). I don’t know the exact explanation for this strange state of affairs. The relevant period of evolution is so long ago’.

Other anticreationists such as Kenneth Miller parrot the same sort of argument (see Refuting Evolution 2, ch. 7: Bad design is evidence of leftovers from evolution?)

Theology trumps science after all?

For all the cant about creationists using theology rather than science, notice that Dawkins was really using a theological argument rather than a scientific one.

The idea that the eye is wired backward comes from a lack of knowledge of eye function and anatomy.

I.e. he was claiming that a designer wouldn’t design something like this, rather than scientifically demonstrating evolution (cf. Rats! A toothless argument for evolution). After all, he admitted to ignorance of an evolutionary explanation.

This is not surprising—the computer simulation he touts as proof for eye evolution starts with the nerve behind the light-sensitive spot. The vertebrate eye has the nerves in front of the photoreceptors, while the evolutionary just-so story provides no transitions from behind to in front, with all the other complex coordinated changes that would have to occur as well 1.

However, ophthalmologists have denounced Dawkins’ claim repeatedly. E.g. George Marshall, the Sir Jules Thorn Lecturer in Ophthalmic Science, stated in reply to Dawkins:
‘The idea that the eye is wired backward comes from a lack of knowledge of eye function and anatomy.’ 2

Dr Marshall explains that the nerves could not go behind the eye, because that space is reserved for the choroid, which provides the rich blood supply needed for the very metabolically active retinal pigment epithelium (RPE). This is necessary to regenerate the photoreceptors, and to absorb excess heat. So it is necessary for the nerves to go in front instead.

It’s important to note that the ‘superior’ design of Dawkins with the nerves behind the photoreceptors would require either: 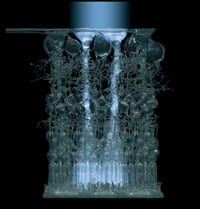 Müller glial cells act as living optical fibers, transporting light through the inverted retina of vertebrates. With their funnel-shaped endfeet, Müller cells collect light at the retinal surface and guide it to photoreceptor cells on the opposite side. Images are thus transmitted through optically distorting tissue. Click here for larger view.
The above section shows that inverted wiring is necessary for vertebrate eyes to work—but that is the direct opposite of what evolutionists claim would be the ‘correct’ wiring. Note that the evolutionists’ claim is actually undercut by their own assessment of squid eyes, which despite being ‘wired correctly’, don’t see as well as vertebrate eyes, according to the evolutionists themselves. 5   6

Interestingly, anyone with excellent eyesight is said to have ‘eyes like a hawk’, which are ‘backwardly wired’, not ‘eyes like a squid’.

The excellent sight provided by these allegedly ‘wrongly wired’ eyes makes Dawkins’ objection absurd even on the face of it. Surely if something works well, it is crass to whinge at alleged design faults. However, the precise reason for its excellent working was discovered only this year, as will be shown next.

Dawkins’ claim that the nerves obstruct the light has been falsified by very new research by scientists at Leipzig University. They showed that the vertebrate eye has an ingenious feature that overcomes even the slight disadvantage of nerves in front of the light receptors. 7

The light is collected and funnelled through the nerve net to the receptors by the Müller cells, which act as optical fibres. Each cone cell has one Müller cell guiding the light to it, while several rods can share the same Müller cell.

The Müller cells work almost exactly like a fibre optic plate that optical engineers can use to transmit an image with low-distortion without using a lens. The cells even have the right variation in refractive index for ‘image transfer through the vertebrate retina with minimal distortion and low loss.’

Indeed, Müller cells are even better than optical fibres, because they are funnel-shaped, which collects more light for the receptors. The wide entrances to Müller cells cover the entire surface of the retina, so collect the maximum amount of light.

Nature is so clever. This means there is enough room in the eye for all the neurons and synapses and so on, but still the Müller cells can capture and transmit as much light as possible.

One of the research team, Andreas Reichenbach, commented:
‘Nature is so clever. This means there is enough room in the eye for all the neurons and synapses and so on, but still the Müller cells can capture and transmit as much light as possible.’ 8

Not only is the inverted wiring of our eyes a good design, necessary for proper functioning, it is also coordinated with an ingenious fibre optic plate. So the vertebrate eye has the advantage of a rich blood supply behind the receptors without the disadvantage of nerves blocking out light. Such fine coordination of parts makes sense with a Master Coordinator, while it’s a puzzle for evolutionists.

This article comes from Creation Ministries International
The original article can be read here:
http://creation.com/fibre-optics-in-eye-demolish-atheistic-bad-design-argument 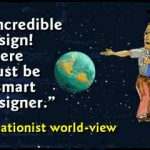