And the Church Said Nothing…

And the Church Said Nothing…

Not a topic about apologetics this week. Something else got my attention.

Last week I was reading the news items concerning my home country, the Netherlands. One article triggered my attention. It was an interview with a doctor about all the measures the government took and is still taking to prevent people from getting Corona. This doctor is as far as I know not a Christian, but I might be wrong. She was pretty clear in her opinion. The measures take a bigger toll on people’s health and society in general than Corona does.

Many rights are taken away. People need to show a OR code to be able to go to restaurants and what not. The minister of health actually started to repeat the words uttered by other leaders by saying that this is now the pandemic of the un-vaccinated.

I wish I could recall where I read the article, but I can’t. Anyway, the doctor said that she was astonished with the fact that hardly any doctor spoke out against this policy. No doctors, no psychiatrists, no mainstream news outlet. And then she said it! “Even the church is quiet!” That last statement really hit hard.

Why would a secular doctor say something like that? Why didn’t she just stop at the normal secular authorities? I think I know why! It is because this doctor knows a thing or two about history. In the past—and I am not talking about the last 70 years, but rather hundreds of years—the church was always there when things got out of hand.

Last year, I already discussed the whole issue around the corona measures. In my first message I argued that the Church can’t permit being scared. Let me quote myself:i

… since when do we consider it normal to deny people social contact in the last phase of their lives? And when they die we still think it is normal denying visitors to come? Where, then, are the Christians who oppose this? Was it not the Lord Jesus Himself who touched the lepers, He who was called friend of sinners.

Later, I’ve made another video in which I openly discuss the credibility of the church and with that the message the churches ought to preach. Again, I will quote a little:ii

I believe we will do the same in ten years from now. Not much sooner, because next year the feelings and emotions about this epidemic are still too fresh. No, after about ten years we probably wonder what happened. Our answer might be one of surprise and bewilderedness. “But we’ve had lovely and professional live streams, and we encouraged each other with Zoom meetings. Yes, we actually drank tea and coffee with each other during these great Zoom meetings!”

Yes, but despite all this, the message is clear. We do not believe our own words when we preach that, in Christ there is no fear. In Christ, we stand tall. ‘For God hath not given us the spirit of fear; but of power, and of love, and of a sound mind.’ (2 Timothy 1:7).

I’ll put the link to these videos in the description below.

So, now we have arrived at that point in which people actually start to wonder why the Church is silent about all the developments around the discriminatory QR code. Last week we as a family, listened to a sermon given by David Pawson. Brother Pawson has already gone to heaven, but his message is still downloadable. He talked about the role of the Church in the second world-war. At one moment he said, and I will paraphrase him:

In the past century the Church spoke out when shouldn’t have, and we have seen the Church being silent when it had to speak.

Is this what’s happening right now? Is the Church silent while it should speak out against discrimination? Is that really the inheritance we want to leave for our children? A weak Gospel which is afraid of going against the ruling parties?

I remember when we still lived in Holland. This is years ago already. Sometimes I preached as well. A few things could not be discussed from the pulpit: Israel; Evolution/Creation; Abortion; the Occult and the Biblical view on raising children. It made the people in church feel uncomfortable. It caused to many discussions. No, rather not talk about these issues. These were things that we might discuss on the Monday evening during the Bible study. Except, we never discussed it there either. I have been in trouble several times for choosing these subjects. Well, maybe also because I wasn’t mild as well. I admit, I wasn’t paying much attention to feelings. But still, nobody else preached on these subjects. Can we now also add Corona and the QR society to the list?

And I know that there are churches who do speak out! They do no allow others to silence them. That’s wonderful! That’s what we read in the Bible. Jesus wasn’t silenced. But these churches are few, and they are frowned upon but other churches and individuals.

This is what Marcus Pittmaniii, the CEO of LOOR.tv said:

For the past 200 years, Christians have believed that things are going to get worse and worse. This faithlessness stunted the entrepreneurial spirit of American Christians. For centuries it was the faith of Christians that expected the world to last, and expected God’s blessings to be generational, that made this nation, and western civilization into the kind of place that would be able to afford to send missionaries to the rest of the world.

Christians built the printing press, but instead of furthering that technology, we used the internet to build online book stores for small Christian audiences while we allowed Bezos to build Amazon. Instead of trying to take over Hollywood and use its resources to serve our neighbors and propagate the Christian worldview, we made cheesy movies that warned people to keep their eyes on the skies because the end of the world will be happening at any moment. Instead of using capital to invest in business and industry, we buried our capital in the back yard and called it stewardship.

Pittman wondered why we invest millions of dollars into nations that are considered to be the poorest in the world. Why we spend so much money on mission somewhere else, but at the same time very few Christians actually decide to spend their money and time in building big companies. Most all monstrous companies are in the hands of secular power hungry people. The kind of people who give donations to poor black people who are starving and then use this to propagate their own agenda.

Don’t get me wrong! I work as missionary, and I depend on gifts for my whole income. So, keep on giving. But! There is nothing wrong with being influential. Nothing wrong with having a position in which you can actually push your ideals. The secular world is doing it and the Church is just quietly doing her thing! Not to loud because we might disturb our secular neighbour in his sleep. Not to loud because our church members might start to feel anxious.

I am making this video in both the English and Dutch language. I am not going to make it into a Bible study. No, I am not going to explain God’s word to you and how this fits in with a pro-active church. You do your homework! Question the pastor and elders in your church. Where are you standing in history? What is your church going to communicate to the world? Are the words of the doctor I started with applicable to you? Or are you speaking out against unjust, discriminatory rules. Are you and your church still credible and relevant to the world around you?

What I have seen in the last year isn’t very ensuring. But as I said! I have also seen some remarkable courage among Christians and churches. I am looking forward to Jesus’ return. Until then, I hope we can work together and really build His kingdom in a world that is rapidly running away from it. It’s time to remember we are not called to put our trust in governments and big industries. Governments and industries that all ran away from Christ and mostly serve themselves, and in doing so, creating a life-destroying world. No we need to remember that we serve a victorious King. A king who called us to be the light of the world.

We need a faith that believes that Christ saves you from sin and hell, but also believes that salvation inspires you to transform the world now.”iv

The two previous videos I’ve made about this topic:

Is the Church Losing Her credibility? (Video)

Is the Church Losing Her credibility? (Page)

The Church of Surinam 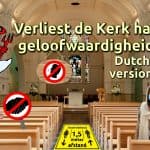 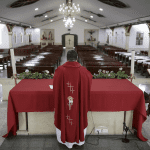 Christ, not Caesar, Is Head of the Church 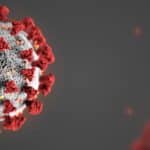