Should we promote the death penalty? 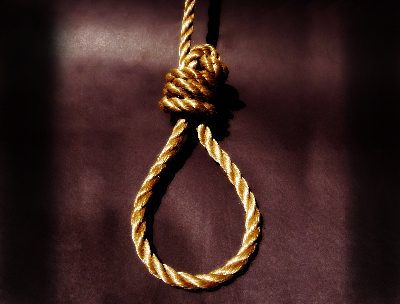 Before we answer the question we will have to look at the way the Bible treats this topic. There are several examples to be found in the Old Testament. For this article we will use two cases in which death was required: During the conquest of Canaan and in cases of homosexuality.1

It was 400 years after God’s promise to Abraham that Joshua had to lead Israel in their conquest for Canaan: Genesis 15:13-16 And he said unto Abram, Know of a surety that thy seed shall be a stranger in a land that is not theirs, and shall serve them; and they shall afflict them four hundred years; And also that nation, whom they shall serve, will I judge: and afterward shall they come out with great substance. And thou shalt go to thy fathers in peace; thou shalt be buried in a good old age. But in the fourth generation they shall come hither again: for the iniquity of the Amorites is not yet full. The Amorites messed up badly towards God and after 400 years their behaviour became their downfall. God will not give away a country which belongs to righteous people as this would make Him an unjust God.

We can see a case of the capital punishment in Leviticus. Leviticus 18:22 Thou shalt not lie with mankind, as with womankind: it is abomination. and Leviticus 20: 13 If a man also lie with mankind, as he lieth with a woman, both of them have committed an abomination: they shall surely be put to death; their blood shall be upon them. Homosexuality was illegal and punishable with death. However, people today are sometimes ignorant of the context in which God gave these laws. The surrounding people-groups worshipped terrible idols and homosexuality was one of the rites they had to perform. God was absolutely clear: He did not tolerate these behaviours among His own people. This law was clearly given to keep Israel pure and holy: Leviticus 18:24-25 Defile not ye yourselves in any of these things: for in all these the nations are defiled which I cast out before you: And the land is defiled: therefore I do visit the iniquity thereof upon it, and the land itself vomiteth out her inhabitants.

The New Testamenty is not mute on homosexuality: 1 Corinthians 6: 9-10 Know ye not that the unrighteous shall not inherit the kingdom of God? Be not deceived: neither fornicators, nor idolaters, nor adulterers, nor effeminate, nor abusers of themselves with mankind, Nor thieves, nor covetous, nor drunkards, nor revilers, nor extortioners, shall inherit the kingdom of God. Homosexuality is still regarded as sin but the death penalty is no longer mandated. The punishment for sin has been paid for by Jesus: Romans 6: 23 For the wages of sin is death; but the gift of God is eternal life through Jesus Christ our Lord. Sinners can be liberated trough the sacrifice of Jesus: 1 Corinthians 6: 11 And such were some of you: but ye are washed, but ye are sanctified, but ye are justified in the name of the Lord Jesus, and by the Spirit of our God.

In the aforementioned examples one can see that God demanded the death penalty in a certain context. The Old Testament shows that God judged (the Amorites) and He wanted to keep His people holy and pure (homosexuality). This last reason was only applicable for the Israelites. The Israelites were not allowed to enforce these rules on groups outside their own territory. Then we see a big change from the Old to the New Testament. Homosexuality is still regarded as a sin (in the same way one would regard an adulterous act as a sin) but the capital punishment is no longer required. Now we see that there is someone who already took the punishment for sin, Jesus!

It was Jesus who received the death penalty. Many will think of all the bad guys during this process (Like Caiaphas, Judas Iscariot and Pilate), at the same time people see Jesus as the Hero of the plot. We most not forget however that our hero was trailed as a criminal and received the most horrid form of capital punishment, it did not seem heroic at all. Maybe, reading all this, one might think that this would never had happened in, for example, modern day America. This assumes that now, two thousand years later, we have achieved a higher moral standard. However, this neglect the fact that, within the Roman empire, the Jewish nation was regarded as a people with very high morals.2 Still, this high morality could not prevent Jesus from being executed. Jesus’ execution demonstrates the flawed nature of all human systems of morality and laws. The capital punishment was part of reconciliation in the Old Testament, it dealt with sin.3 In the New Testament we can be reconciled through the sacrifice of Jesus: 1 John 2: 2 And he is the propitiation for our sins: and not for ours only, but also for the sins of the whole world.

Is the New Testament less strict on sin?

Did God relax about sin? No, absolutely not! Jesus made the rules even stricter. Physical adultery was a sin in the Old Testament but the New testament teaches us that even looking at another woman with lust is already a sin (one does not even commit the sin physically): Matthew 5: 27-28 Ye have heard that it was said by them of old time, Thou shalt not commit adultery: But I say unto you, That whosoever looketh on a woman to lust after her hath committed adultery with her already in his heart.

Is the death penalty still necessary?

Jesus took the punishment for our rebellion. Followers of Christ should not demand the death penalty but instead point at the accomplished work of Jesus. This does not mean that God is okay with sin. The laws of the Old Testament are still in use because Jesus said: Matthew 5: 18 For verily I say unto you, Till heaven and earth pass, one jot or one tittle shall in no wise pass from the law, till all be fulfilled. However, Jesus fulfilled the law, he took the punishment for all transgressions. This is why followers of Jesus will no longer be judged by the law but they are discharged and forgiven because the penalty is taken care of. The capital punishment was only necessary in the time when God’s people still lived under a theocratic regime, that is a system in which God’s morals are sanctioned by the government. Clearly this is no longer the situation. God’s people are no longer bound to a strict place or country, instead God’s people now live all over the world as part of His kingdom. God’s kingdom is inaugurated when Jesus came to earth. Jesus’ followers have to live according to the rules of this kingdom as summarised in Matthew: Matthew 22: 37-40 Jesus said unto him, Thou shalt love the Lord thy God with all thy heart, and with all thy soul, and with all thy mind. This is the first and great commandment. And the second is like unto it, Thou shalt love thy neighbour as thyself. On these two commandments hang all the law and the prophets. Jesus commanded us to testify of salvation and to live out the principles of God’s kingdom by making peace, pursuit righteousness, comforting others, to love etcetera (Matthew 5).

Related subject: Would you kill when God asked you to?