Reason 2 – ‘Men have no true sight and sense of their own sinfulness.’

Okay! We’re on a roll here! This is the second reason of why people won’t accept the Gospel of Jesus Christ.

I’ve been pretty busy in the week after the introductory video about this series. I didn’t say much about anything but still it received hundreds of views and a lot of comments. Many positive responses, which is nice and encouraging. But it also looked like YouTube emptied its special bucket, full of sceptics, atheists and other ‘we will always argue against religion’ type of people. I am used to see that on YouTube, but didn’t notice this group on Odysee yet. It was bit of a challenge to open the comments with our internet connection, but in the end I hope I’ve replied to everybody.

Anyway, the second reason of why people won’t accept the Gospel:

‘Men have no true sight and sense of their own sinfulness.’

Men have no true sight and sense of their own sinfulness. They see not the sinfulness of their nature, of their hearts, lips, and lives, but are like Samson, without his two eyes:
Matthew 4:12 ‘They that be whole need not a physician, but they that are sick.’
They are pining away in their sins ; their sickness has not yet taken them by the heart ; their wounds are not lanced ; the law has not had its effect upon them, and therefore the Gospel is not relished.

I would have liked it to meet mister Boston. He sounds like a smart man. A man that could easily teach me some good stuff about the Bible. Again, his observation is spot on. And again, it is not only talking about his time but this attitude towards sin can be found throughout all ages and in every corner of the world.

Let’s start by looking at the word ‘sin’. Yuck! That’s a ugly and nasty word to use, isn’t it? It sounds so much like a qualification of a very bad person. A sinner! Yes, that’s what you would call a dictator or a rapist. Whenever I start to talk about sin, people immediately back away from the conversation.

“Sure, I have done wrong things in my live… But that doesn’t make me the same as a serial killer!”

You see? The word ‘sin’ knows categories in the minds of people. You have little sins and you have big sins. The little ones are okay and they don’t make you a sinner. Like the man or woman who said: “Sure, I have lied before… But…“ . There is almost always a ‘but’ right after the acknowledgment of having done things wrong.

Sometimes I watch the videos of Ray Comfort, aka the banana man. He doesn’t mind that nickname and it happens to be that I love bananas. We eat them all day, every day. Anyway, he meets many who just don’t understand the severity of sin. They come up with all sorts of excuses, but Comfort has a handy trick. He starts asking people questions about the 10 commandments.

Well, at that point the situation is clear. The person understands that his or her wrongdoings are more than ‘just’ a mishap.

When I go to the villages and talk about the Gospel of Jesus Christ. I do not follow the unwritten handbook of an evangelist. This is basically a collection of ideas about how to approach people. It is the standard of what you learn during Bible studies. Listeners are being asked whether they admit that they have sinned. Most people will answer this honestly and they would say yes. That sounds wonderful but it doesn’t mean they understand how severe their situation in front of God is.

Mostly I quote Romans 3:23 “For all have sinned and fall short of the glory of God”.

Then I tell the people that sin is nothing more and nothing less than your wrongdoings. Little fibs, gossiping, anger, not caring for one and other, selfishness, not respecting your parents, using foul words etc. Seemingly small things compared to major things like murder, adultery, and other big sins that can be seen by everybody. Still, these ‘little’ sins are more than enough to miss out on the glory of God. God is perfect and He cannot allow anything less into close proximity. Anything less would ruin perfectness.

It is amazing that God the Father provided a solution. He was not obligated to do anything, still He came down from heaven and became flesh. He was born in a poorman’s hotel, a stable. He became human and listened to the name Jesus, also known as the Christ, the anointed one. The Lord Jesus walked this earth, He suffered the same problems as you and I. He knew temptation but did not fall for it. He lived a perfect life. As being the perfect human He could substitute for our wrongdoings. And He did! He took all iniquities, big, small, seen and unseen upon Himself and He died for it. The ultimate punishment. Then after three days He came back to life again. He defeated death and became the ultimate ruler over everything.

Paul says in Colossians 2: 10 “And ye are complete in Him, which is the head of all principality and power […]”

Did you here that? In Christ you will be complete. The other way around goes the as well. Without Jesus you are incomplete. Not because you miss an arm or leg, no you miss the necessary glory of being without sin. Sin causes you to be incomplete but through Jesus Christ, Who is above all, through Him you can become complete. This amazing Saviour wants to save you too. Don’t be like the fool in the Bible who build his house on the sand. Be like the smart guy who made sure that his house was build on a good foundation. Jesus Christ is the best foundation you can ever get for you life! And I guess your life is worth more than just a sandy underground, right? 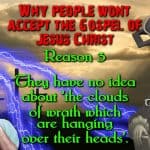 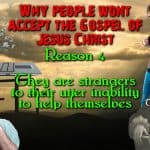 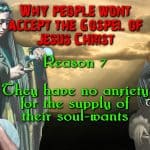 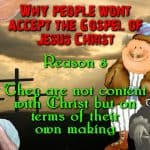