I believe it was 2006 that Mr Dawkins published his book, the God Delusion. I have never paid to much attention to his writings simply because I thought the hype would die a fast and silent death. His book isn’t, what you would call, a very sophisticated philosophical book. It is smoothly written, but it lacks a lot, philosophical speaking. Anyway, I was wrong about the dying stuff. Many still love his audacious mantra with which Dawkins starts the second chapter:i

The God of the Old Testament is arguably the most unpleasant character in all of fiction: jealous and proud of it; a petty, unjust, unforgiving control-freak; a vindictive, bloodthirsty ethnic cleanser; a misogynistic, homophobic, racist, infanticidal, genocidal, filicidal, pestilential, megalomaniacal, sadomasochistic, capriciously malevolent bully.

I have always wondered what one could answer this foolish but immensely popular statement given by Mr. Dawkins in his equally foolish book, the God Delusion. Sceptics, Atheists, and many un-believers love these kins of rhetoric. It sounds so challenging! It sounds tough. But, in reality it gives away a total misunderstanding of the Biblical God. Minster Dawkins might know a thing or two about biology, but theologically speaking, he fails big time.

So, let’s discuss a few of these titles he so boastfully assigned to the God of the Bible. Let’s see what we can say about it without going into endless debates.

We will start with the very first title: Vindictive.

To me belongeth vengeance, and recompence; Their foot shall slide in due time: For the day of their calamity is at hand, And the things that shall come upon them make haste.

This is quoted by the apostle Paul:

Dearly beloved, avenge not yourselves, but rather give place unto wrath: for it is written, Vengeance is mine; I will repay, saith the Lord.

God is the one who has the authority to carry out vengeance. These could tie into a couple of the New Testament parables. For example the master punishing the slave who couldn’t forgive his fellow slave and the field owner who killed the tenants who killed his son. These are images that portray God bringing vengeance for others.

There you go! God is vindictive… Right? But hold on a minute! Let’s see what the dictionary hast too saith about it:

Vindictiveness: showing a strong and unreasonable desire to harm or upset somebody because you think that they have harmed you.ii

Vengeance: the act of punishing or harming somebody in return for what they have done to you, your family or friends.iii

Two quite different things. And that is typically what people like to do. They use a word which comes close to the original meaning but which is not quite the same. Then they continue to debate about that word they themselves just started to use. That is what we call the straw man fallacy. God is by no means vindictive. However, there are examples in the Bible of Him taking vengeance on people who for example said that they would do, or were doing, some good stuff, but in reality they were doing quite the opposite.

Anyway, I’ve spent too much time already on this word. Let’s go to the next one.

[…] when the LORD thy God shall deliver them before thee; thou shalt smite them, and utterly destroy them; thou shalt make no covenant with them, nor shew mercy unto them […]

I have touched on this in a different video. There I argued that the ancient people used phrases like ‘utterly destroyed,’ to explain that they had achieved absolute victory. Also, I said these commands were restricted to specific locations. These locations were military centres. These locations were not your average city populated by innocent civilians.

Nevertheless, I am not dogmatic on the explanations I gave, because I also recognise that God meant business. In other words, yes, I believe Israel mostly had to target military centres, but no, that doesn’t mean that only military people were killed.

But does this mean that God is a bloodthirsty ethnic cleanser? The short answer is no, but let me explain. Two pieces of evidence are worth mentioning.

Firstly, we see that there are exceptions to God’s command to completely destroy. Rahab, a Canaanite prostitute, is spared from the complete destruction of Jericho. Why? Because she puts her trust in the LORD. Then, only one chapter later, Achan, an Israelite is put to death for taking some stuff from Jericho, something God had forbidden to do. Achan’s entire household, and that includes the donkeys, were treated in the same way as Jericho. God’s cleansing of the Promised Land was not genocidal. God’s persecution wasn’t against race or one group in particular, but it was against sin.

Again, Dawkins is using a straw man fallacy here. He takes the killing passages and he puts the word ‘genocide’ somewhere in between. The meaning of ‘genocide’ is:iv

…the murder of a large number of people from a particular nation or ethnic group, with the aim of destroying that nation or group.

Deuteronomy 9 explains that Gods wrath wasn’t aimed at a specific nation or ethnic group. Israel didn’t get the promised land because they were such upright, holy people.

Not for thy righteousness, or for the uprightness of thine heart, dost thou go to possess their land: but for the wickedness of these nations the LORD thy God doth drive them out from before thee […]

I am not saying that the whole killing stuff doesn’t disturb me. We all should be worried about these texts. However, we shouldn’t doubt God’s character, but we should realise that these episodes show us our own shortcomings towards the Creator. God punishes evil, and the Canaanites were extremely excellent in doing the wrong stuff.

A misogynist is a person who hates or dislikes women or believes they are not as good as men.v

Well, Dawkins has a big vocabulary, I’ll give him that. However, the way he’s using these words are portraying his complete lack of understanding of God’s character.

Atheists usually come with all sort of examples to demonstrate their point. Eve was created after Adam; she was created to be his helper; Eve was made from Adam’s rib, so obviously she is not as highly regarded; men throughout history have treated women horrible (Such as the story of Lot who received angels in his house. An angry mob demands that Lot surrender the angels to their lust. Instead, Lot proposes his own daughters in place of the angels); and did you know that some churches tell women to be quiet, to have long hair and wear dresses!

All these examples cannot account for God’s thinking, can they?

I am not going to discuss these individual points because I rather look at Jesus and talk about the things He did, in public! Jesus is the image of God (Colossians 1:15), and as such He puts forth the attitude God the Father has towards women.

Looking at Jesus, what do we see? I use a list from the website of Emily Elizabeth Anderson:vi

Let me be clear! If a man says he follows Christ but doesn’t respect women, he’s a hypocrite. I can’t say it milder than that. We, men, are warned and ordered to respect women.

Likewise, ye husbands, dwell with them according to knowledge, giving honour unto the wife, as unto the weaker vessel, and as being heirs together of the grace of life; that your prayers be not hindered.

Husbands, love your wives, even as Christ also loved the church, and gave himself for it;

To summarise, Jesus often addressed women directly while in public. This was unusual for a man to do. The disciples were surprised to see Jesus talking with the Samaritan woman at the well of Sychar. The Lord spoke freely with the woman taken in adultery. We see Jesus talking publicly with the widow of Nain, the woman with the bleeding disorder, and a woman who called to him from a crowd. Likewise, Jesus talked to a woman who was twisted and bent over and could not straighten up at all for eighteen years. Even in the most horrible time of His life, He spoke to a group of women while He was on His way to be crucified.

To Sum it all up

This was second part of this quote. We’ll tackle the next bit next time. I have no intention to debate with the atheists who love this book, I just don’t. Some like to see this as a sign of weakness on my part. And you know what? That is fine, keep on thinking that, I don’t mind. However, I hope, and it is my prayer, that people who are stuck in these foolish atheistic mantras will open their hearts and minds to the word of God.

For the Christians who watch this video, I would like to challenge you to explore these topics even more. Maybe your colleague, your sports mate, or maybe a family member has heard these kinds of quotes about God’s character, and is wondering how much of it is true. Maybe, you yourself are a little overwhelmed by these words? It is good to see what the possible answers can be. To learn how wonderful God actually is!

Anyway! Do let me know your thoughts in the comments of the video or article below. Remember! I am mostly active on my Odysee channel. You’ll find a link to that channel in the description of this video.

I very much appreciate your prayers and support! Please take a look in the description of this video to find out how you can help me. Also, I’ll place a link there to both the Dutch and English transcripts of this video. And finally, you’ll find the links to the other videos I’ve made about this topic… All, in the same description. Isn’t that convenient?

God bless you, thank you for watching, and let’s see how we approach the rest of Dawkins quote in the next video! 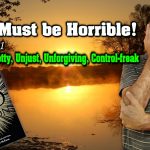 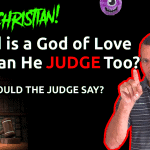 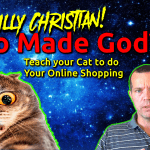 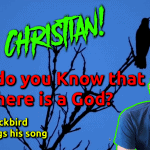