Is Religion the Main Cause of War and Violence? 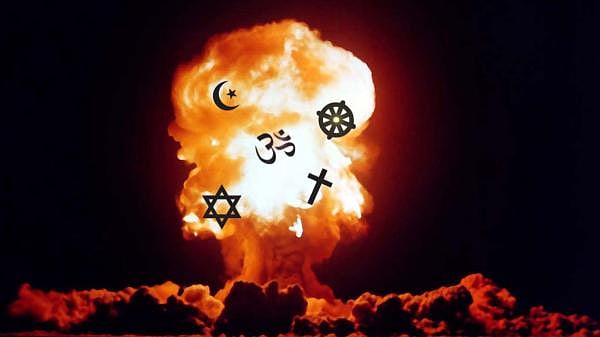 Some state that religion is the main cause of war and violence. Faith is the root of all wars throughout history. This has almost become a mantra for many atheists and secular humanists. Known atheistic writers, like Harris, make sure that this thought becomes embedded in the thinking of many people. In his book, ‘The End of Faith,’ Harris depicts faith as ‘the most prolific source of violence in our history.’1

One cannot deny that there have been wars infused by religion (like the Crusades and the Thirty Year’s war), but it is fantasy to point at religion as main cause. To give the argument some weight people point at the terrorists who, in the name of Islam, destroy trains, buildings or other targets in order to murder as many as they can. It does not take a genius to discover the fallacy behind this argument. It is like saying that baseball lovers are dangerous for society because in the past someone was killed with a baseball bat.

Philip en Axelrod describe, in their three-volume ‘Encyclopedia of wars‘, about 1,763 wars that have been waged over the course of human history. Of those wars, the authors categorize 123 as being religious in nature,2 which is an astonishingly low 6.98% of all wars. However, when one subtracts out those waged in the name of Islam (66), the percentage is cut by more than half to 3.23%. 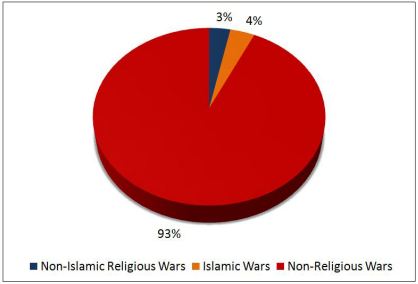 With other words: All religions combined, minus Islam, only gave rise to less than 4% of all wars and violent incidents in history. Further, they played no motivating role in the major wars that have resulted in the most loss of life. 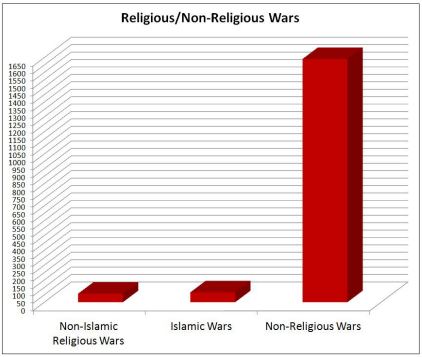 Facts state that almost all wars were motivated by non-religious and naturalistic motifs. Lives lost during religious conflict pales in comparison to those experienced during the regimes who wanted nothing to do with the idea of God—something showcased in R. J. Rummel’s work ‘Lethal Politics…‘ and ‘Death bij Government‘, laat dit duidelijk zien:


‘Almost 170 million men, women and children have been shot, beaten, tortured, knifed, burned, starved, frozen, crushed or worked to death; buried alive, drowned, hung, bombed or killed in any other of a myriad of ways governments have inflicted death on unarmed, helpless citizens and foreigners. The dead could conceivably be nearly 360 million people. It is though our species has been devastated by a modern Black Plague. And indeed it has, but a plague of Power, not germs.’4

The historical evidence is quite clear: Religion is not the number 1 cause of war.

If not religion what than is the main cause of war and violence conflicts? The same thing that causes all crime, cruelty, loss of life, and other such things. Jesus provides us with the answer:


”For from within, out of the heart of men, proceed evil thoughts, adulteries, fornications, murders, Thefts, covetousness, wickedness, deceit, lasciviousness, an evil eye, blasphemy, pride, foolishness: All these evil things come from within, and defile the man.’ (Mark 7:2-3 KJV)


‘From whence come wars and fightings among you? come they not hence, even of your lusts that war in your members? Ye lust, and have not: ye kill, and desire to have, and cannot obtain: ye fight and war, yet ye have not, because ye ask not.’ (James 4:1-2 KJV)

In the end, the evidence shows that the atheists are quite wrong about the wars they claim so desperately to be religion’s blame. Sin is the number 1 cause of war and violence, not religion, and certainly not Christianity. Next time when someone points at religion as the root of wars and violence you can ask them whether the have heard this, know this, think this or actually examined this.

Original article by R. Schumacher edited by M. Slick:
‘The Myth that Religion is the #1 Cause of War’ (https://carm.org/religion-cause-war)
Further adjustments for Apologeet.nl by: J. Hofmann (juli 2015).

Why do we Need Apologetics?

How do You Know that There is a God?
0 0 votes
Article Rating
Subscribe
Login
0 Comments
Inline Feedbacks
View all comments