In my last video, I asked you what I should do next. I was thinking about explaining some fine but sometimes hard to understand apologetic arguments or some videos about Romans 13. One of you actually posted this comment:

@anonimous
What should we do if the government is oppressing people? Should you defend yourself or the other people, or should you submit and let you and the others get oppressed?

Roman 13… The most cited Bible text by oppressing rulers. It is also a fiercely debated text among Christians. If you have time, you should read about Dietrich Bonhoeffer. This German Pastor stood up against Adolf Hitler. Bonhoeffer walked in the inner circles of Hitler and as such he could come close to the Nazi Führer. In the end he actually planned to kill Hitler. The attempt failed and Bonhoeffer got arrested and executed.

I’ve studied this history, I discussed it with my German family. I talked about it with other Christians. Soon, I found out that there was no coherent opinion. Some said that he just disobeyed God’s word, others said he did a great job. A third group didn’t have an opinion (which is strange in the Netherlands). And finally there was a group that said that Bonhoeffer couldn’t be a Christian, because Christians don’t murder other people, period!

For many of us it is quit save and easy to talk about these matters. Sitting in a small group and being very content with our lives. We might have a nice, and above all, save job, a lovely house with a nice garden. And nothing to fear except loosing our comfort. Let’s keep that in mind when we try to tackle hard questions like the one about Bonhoeffer.

Anyway, I am not going to talk about the Bonhoeffer example. This was more to get your attention, no, I would like to pull the whole issue of obeying a bit closer to our own time and situation. I don’t know about you, and in which country you’re in, but for me, it hasn’t been very difficult to obey the government of the Netherlands. Until now, that is. In all fairness I need to say that I did have trouble obeying my government when we were there in 2020. We came back to Holland for a four months furlough, and we literally landed in a country that was slowly but surely going berserk over a virus. A virus of which we quickly knew that it could be compared with a hefty flu virus.

Still, people were dying (as people do every year around the months between November and April when we have the flu season) and the government decided it would be smart to close everything down. Not only that, they also thought it to be a good idea to tell us to stay away from each other. They came up with the brilliant move to penalise everybody who was walking with one too many friends in public. In the Netherlands the government can not force churches to close by law. They can only give recommendations to churches. So, very clever, they changed their rhetoric on television. When they announced all the new rules that could be enforced, they just shoved the recommendations in between. What happened astound me! The Dutch believed that these recommendations were law. Many churches closed their doors and Christians decided that the new ‘love your neighbour’ was going to be something you had to do at a distance, if at all. Because, was the rhetoric on mainstream media, if you really love one and other you should stay away from each other. You wouldn’t want the other to die because of you? Would you?

Amidst all this I was waiting for this one sermon, or this one word of deliverance. Namely, the relieving words from Romans 13 in which Paul says we just have to obey the government. Wouldn’t that be lovely? In times of these, one wants to have some guidance right? Should I go to this sick brother or sister? Should I hold someone who is feeling sad? Do I shake hands with that homeless person?

The answer came! It didn’t even take long. I can’t remember where and when but somewhere in between someone had to quote Romans 13 to justify the closure of the churches. Yes! Romans 13 was there to help me to get rid of my doubts. It was so simple: The government has been put in place by God and not obeying the rulers is like not obeying God. How lovely! Now I could just tell the sick, the sad and the homeless that I wasn’t allowed to come close. Now I could say that if it was up to me, I would just give them a hug… But rules are rules and there is nothing I can do about it.

Okay, what text am I talking about? Here I’ll let you read it. Just pause the video until you’re done:

“1Let everyone be subject to the governing authorities, for there is no authority except that which God has established. The authorities that exist have been established by God. 2Consequently, whoever rebels against the authority is rebelling against what God has instituted, and those who do so will bring judgment on themselves. 3For rulers hold no terror for those who do right, but for those who do wrong. Do you want to be free from fear of the one in authority? Then do what is right and you will be commended. 4For the one in authority is God’s servant for your good. But if you do wrong, be afraid, for rulers do not bear the sword for no reason. They are God’s servants, agents of wrath to bring punishment on the wrongdoer. 5Therefore, it is necessary to submit to the authorities, not only because of possible punishment but also as a matter of conscience. 6This is also why you pay taxes, for the authorities are God’s servants, who give their full time to governing. 7Give to everyone what you owe them: if you owe taxes, pay taxes; if revenue, then revenue; if respect, then respect; if honour, then honour.”

So this is going to be the next subject I would like to talk about. Doesn’t that sound like fun!

It is kind of a big subject, and I am not promising that my view is going to end all discussions. No, far from thinking that I have all the answers I like to be humble in sight of all the great Christian thinkers before us. Where would we have been without them! Some spend their entire life studying God’s word so let’s not assume that we will solve puzzle in a few videos.

Nevertheless, it can’t hurt to look at this text and to see what we can find. I am going to divide the study into blocks. Firstly, we are going to see how the Christians throughout the ages have treated this text. Secondly, we are going to determine what the text is not saying. After that we can look and see whether we can find out what the text might mean. Then, what I believe it really means and then finally what we, as Christians, should do with it.

So, how many videos is that going to be?

I’ll try to keep the videos as short as possible… Not because I think you have the concentration abilities of a two years old child that is waiting for the ice cream man to come into the street. No, it is simply because it takes forever to upload them when they are too big.

I hope and pray that these coming video will help us to understand God’s word even better. And I want to thank you for all your support and for watching my videos. I greatly appreciate it. My wish is that you will be encouraged by the videos and that it will help you to strengthen your faith in the Lord Jesus Christ! For those who are watching this video on Bitchute or Youtube, you can also follow me on Odysee… or even better: Why not starting your own channel on Odysee? You can use my invitation in the description below, and we both receive some free LBC. 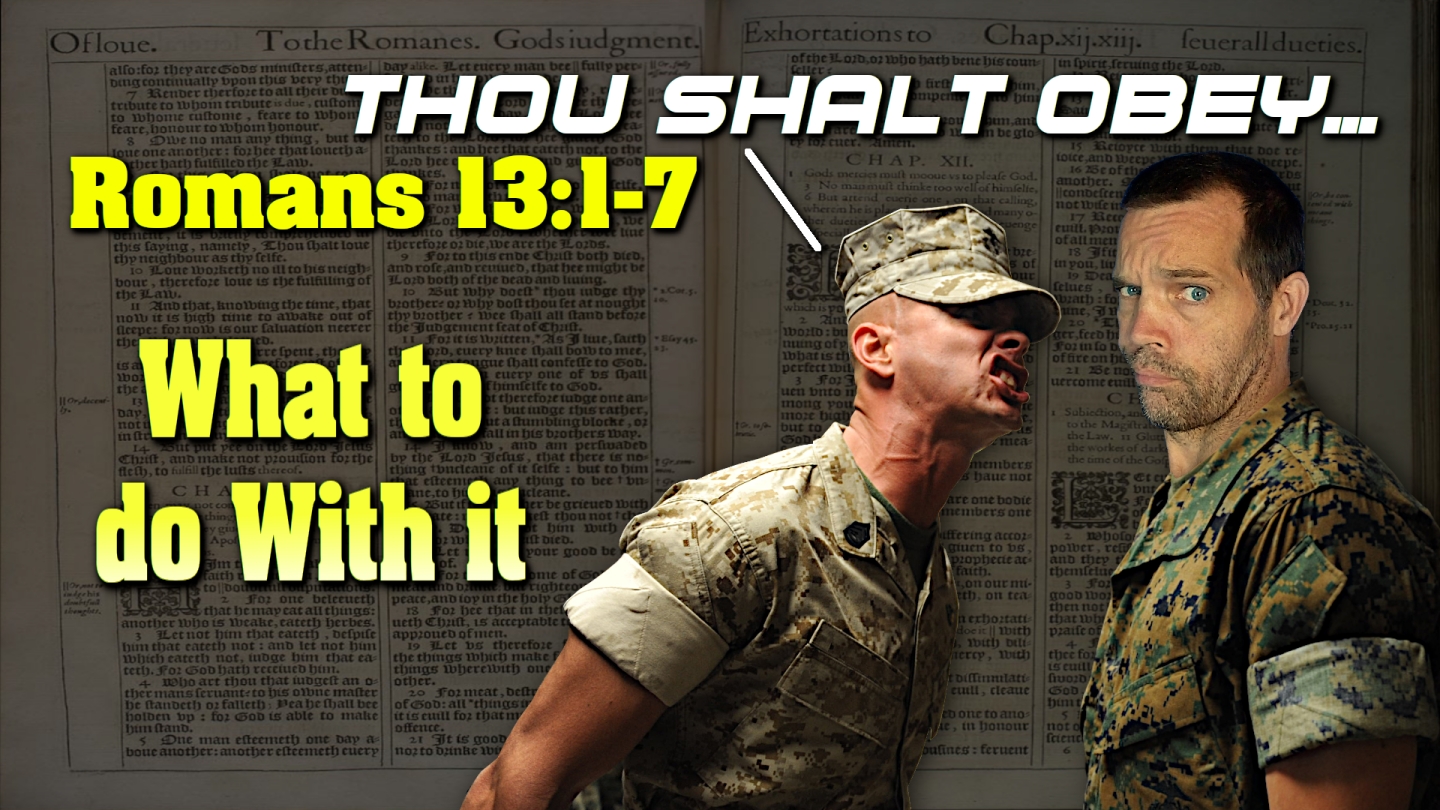 What to do with Romans 13:1-7 Introduction And here we are! The last episode of this series. I knew this one would come, and I have been thinking a lot about the applications of Roman 13. I am slightly nervous about making this video (only slightly). Most of what we have discussed until now was […] 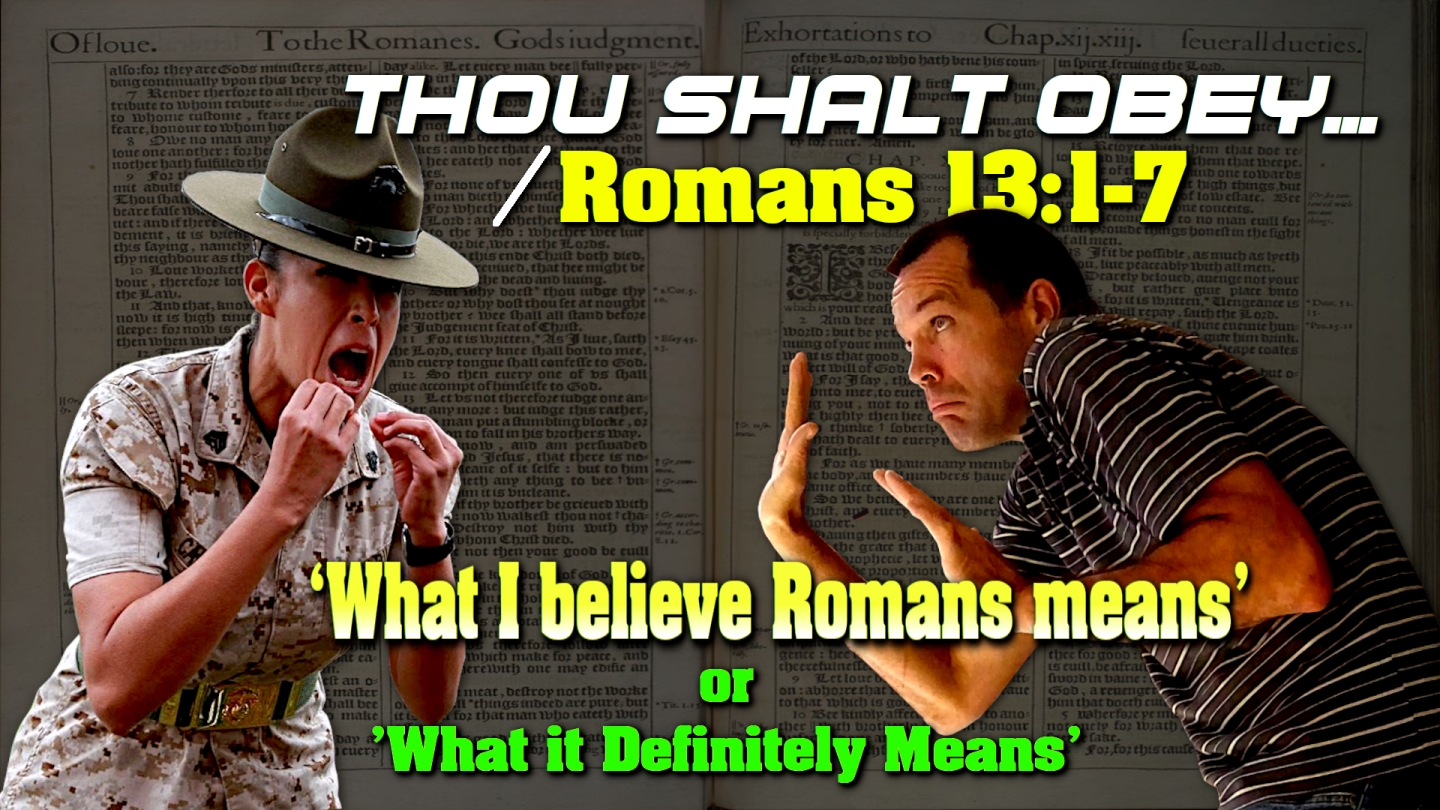 What I Believe Romans 13:1-7 Means Introduction I am a bit doubtful whether I should name this episode ‘What I believe Romans means’ or ‘What it definitely means’. Let’s just begin, and we’ll find out the most appropriate title along the way, okay? There is no Authority Outside God We have discovered in the fourth […] 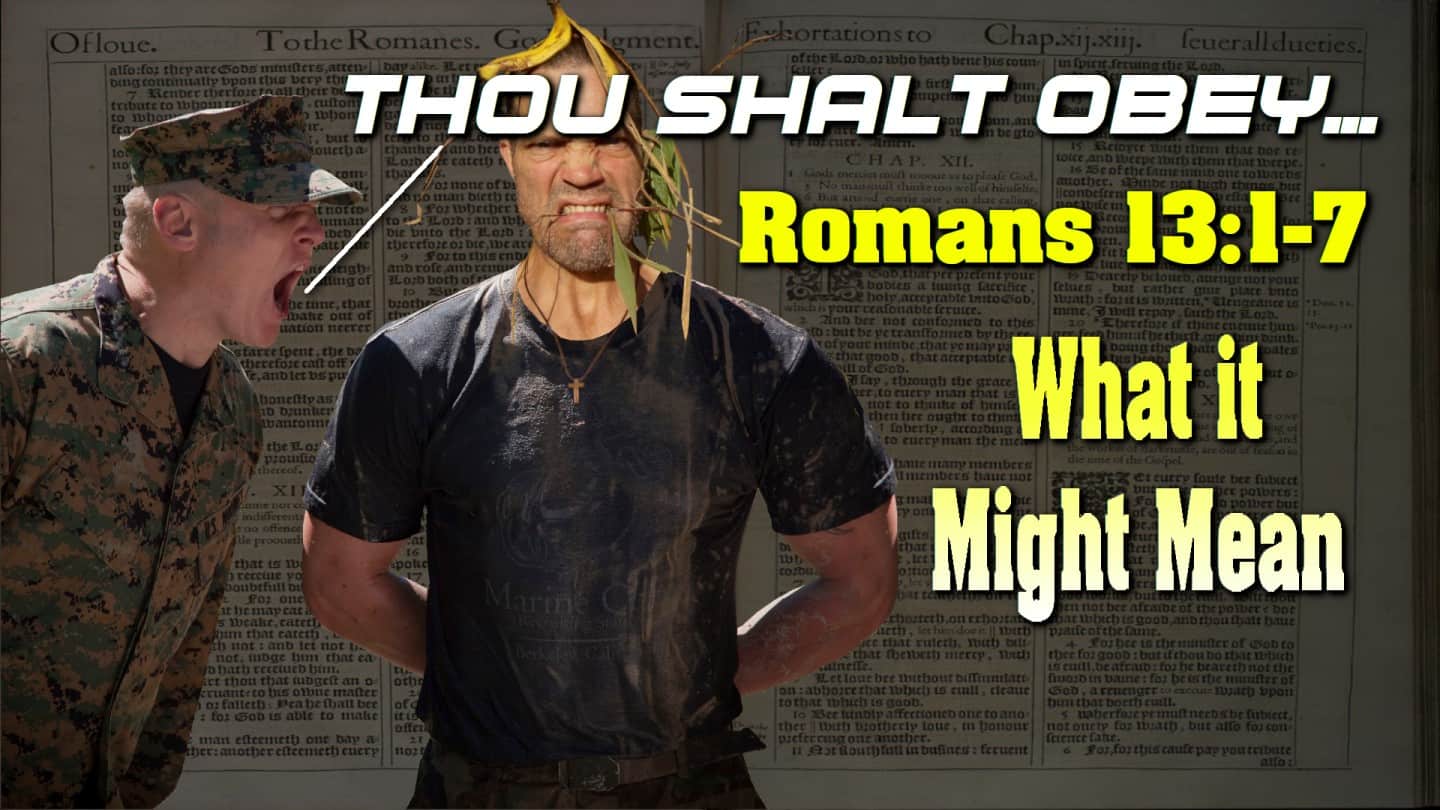 What Romans 13:1-7 Might Mean Introduction Sometimes you just want to see whether there are more possibilities than one. Welcome to episode 4 about Romans 13:1-7, in which we are going to do just that! Examining the text to see what else it might mean. We have looked at history and how our predecessors made […] 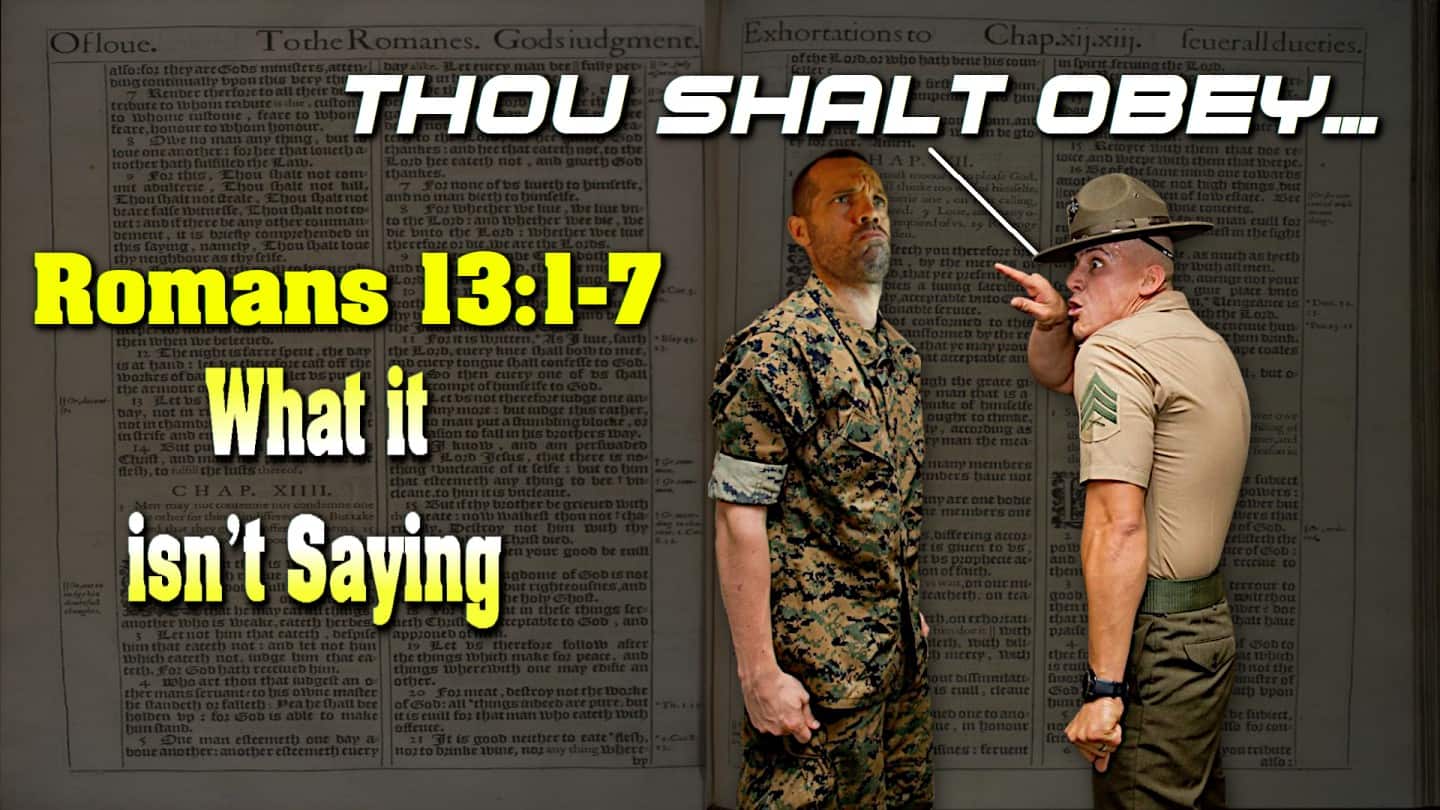 What Romans 13:1-7 isn’t saying Introduction This is part three of this series about Romans 13:1-7. In part two we’ve looked at the history around this passage. We’ve seen that it strongly depends on who is in charge how we interpret this text. It is also interesting to see that, as soon as the church […] 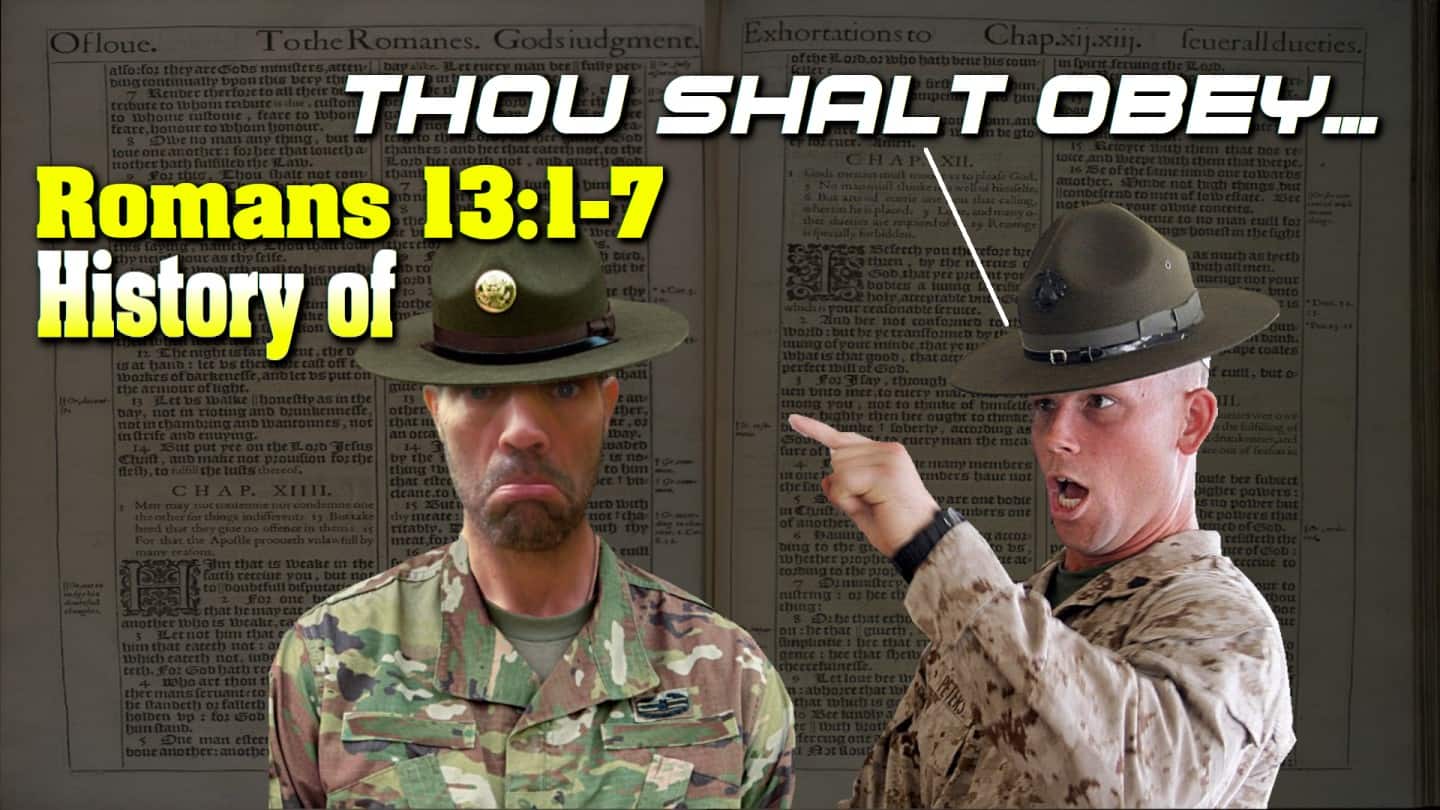 Throughout History of Romans 13:1-7 Let’s dive into the history and see what Christians throughout the ages made of this text. As I said in the introduction Romans 13 seems almost always be invoked by oppressing groups or governments. It is not often that you hear the ‘normal’ people say that we need to obey […] 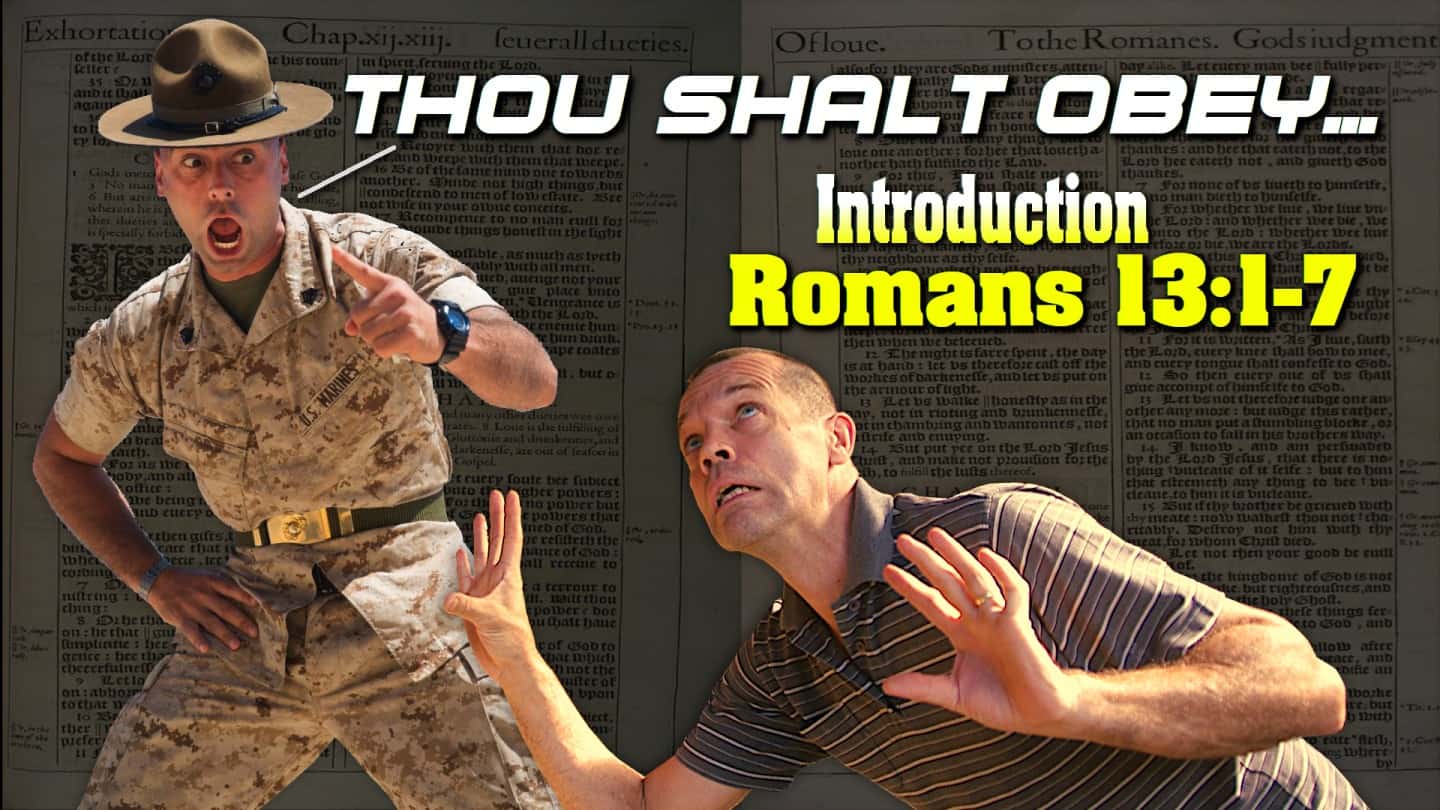 Introduction to Romans 13:1-7 In my last video, I asked you what I should do next. I was thinking about explaining some fine but sometimes hard to understand apologetic arguments or some videos about Romans 13. One of you actually posted this comment: @anonimous What should we do if the government is oppressing people? Should […] 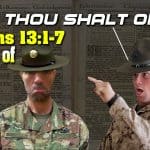 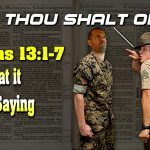 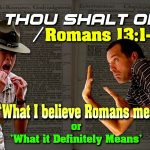 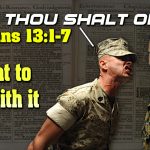